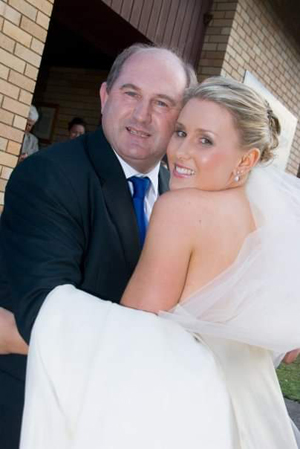 Ten years ago, Rebecca (Bec) Malaki had her first baby and pioneered Jirsch Sutherland’s work-from-home (WFH) program. Fast forward to today and she has recently celebrated 20 years with the firm (and seen many of her colleagues follow her lead in working from home!)

Bec’s 20-year career with Jirsch Sutherland began with a little nudge from her father, Tony Kelly, who had previously worked at the firm and had stayed friends with the firm’s founder, Rod Sutherland. “My dad heard about a receptionist role going at the Sydney office and I didn’t have much choice about going for an interview! Dad said ‘go for it!’,” laughs Bec, who was just 18 at the time.

Bec obviously inherited her father’s proactive approach, as she was soon helping out the managers and supervisors with extra work. “By doing this I learnt about other areas of the firm. After a while it made sense for me to move into a junior role in accounts as I had proven myself.”

Over the next 10 years, Bec worked in a variety of roles. “I’m now in administration and have pretty much made my own role,” she says. A role that is the first of its ‘type’ at Jirsch Sutherland.

“I was the first person allowed to work from home. As I had already been with the firm for 10 years, they trusted me to do the work from home,” explains Bec. “Even during busy times, like end of financial year, if I need to take time away from the office to be with my kids, the partners understand and say, ‘that’s not a problem’. They are flexible which is great. And I always make up the lost time later.”

Jirsch Sutherland Partner Andrew Spring says Bec is “one of our most trusted team members”, who spearheaded the firm’s flexible work arrangements.

In her current role of supervisor, Bec is kept busy with administration and compliance tasks and “any other jobs that come my way. I’m a bit of a Jack of all trades now. I cruise along, chasing people up!”

When asked for tips for anyone considering working in a support role at an insolvency firm, she is quick to say, “You need to be strong, as you’re always hearing about businesses in trouble or going under. It has actually made me stronger, more resilient, over the years.”

It’s this pragmatic and down to earth outlook that has no doubt helped her deal with the ‘second-hand’ stress that comes with working in insolvency.

When not at work, Bec loves to go shopping and spends weekends taking her kids to sports, including watching Leilani play netball.

And while Bec still finds it tricky at times juggling work and parenthood – made even more challenging with periods of home schooling daughters Leilani 10 and Kendall 7 and son Hendrix 5 – she enjoys coming into the office two days a week: “I can’t say I don’t enjoy having a break from the kids,” she admits. A sentiment many parents can relate to!