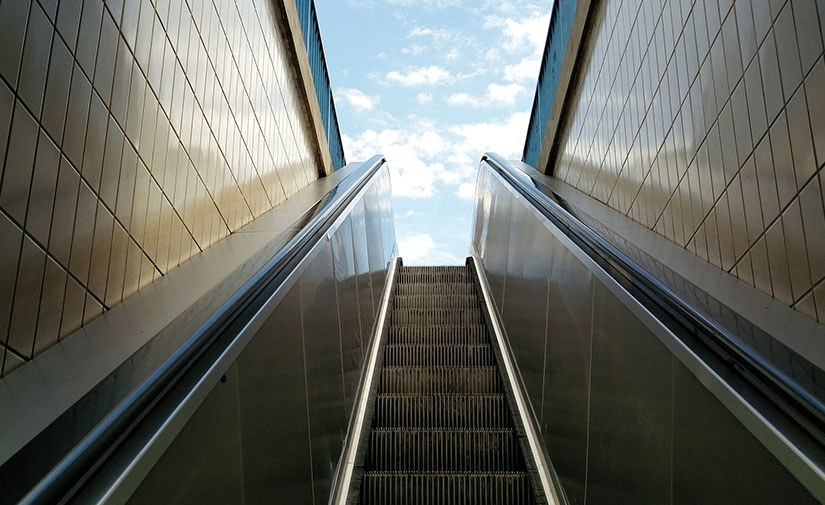 A phasing out of government support across the world and an easing of COVID restrictions is expected to drive insolvency numbers back to pre-pandemic levels.

Australia is just one country expected to experience high insolvency numbers in 2023 on the back of the withdrawal of government support. While some countries are already citing “back to normal” insolvency figures, for most, this situation is expected to occur during late 2022 and 2023.

These findings come from Atradius’ April 2022 insolvency report: “Insolvencies increase as government support ends”. The report also found global growth is expected to slow to 3.4% in 2022 as price pressures rise due to ongoing supply chain disruptions, strong consumer demand and the war in Ukraine. Emerging Asia remains the fastest growing region (5.2% projected for 2022) while in China, growth is expected to moderate to 4.8%, with the ailing property sector and occasional tight restrictions to fight COVID outbreaks playing a significant role. Global inflation for 2022 is forecast to be 6.1%.

A return to ‘normal’

While an insolvency tsunami was predicted when the effects of COVID became known, the situation wasn’t anywhere near as severe, thanks to generous government support and the changes countries made to their insolvency legislation to protect companies from bankruptcy. In fact, cumulatively, insolvency numbers fell 29% in 2020-21, with the highest contraction in 2020 being in Singapore, Australia, France, Austria, Belgium and Italy. In 2021, the countries where insolvency contraction was the highest were Portugal, the Netherlands, South Korea, New Zealand and the US.

Atradius expects general insolvency levels will begin to return to normal throughout 2022. “We forecast an overshooting of the normal level of insolvencies in the second half of 2022 or the start of 2023,” the report states. “This will be a result of additional defaults coming from zombie companies after government support is withdrawn. In general, by the end of 2023 we see a flattening out of the insolvencies to normal levels.”

For example, the highest insolvency rates to date for 2022 are in Portugal, the Netherlands, Singapore, Belgium and the US. These countries had low insolvency levels in 2021 and withdrew fiscal support in either late 2021 or early 2022.

New Zealand and Hong Kong are bucking the trend with decreases in the number of insolvencies throughout 2022. This is attributed in some instances to support being extended until the end of 2022 – effectively concentrating the adjustment in 2023. Other countries where the 2023 insolvency growth rates are projected to be high include South Korea, France, Poland, Norway and Australia, reflecting relatively low insolvency levels in 2021 and a later withdrawal of government fiscal support in mid-2022. Therefore, insolvency levels are likely to be high at the start of 2023 and will progressively normalise throughout the year. 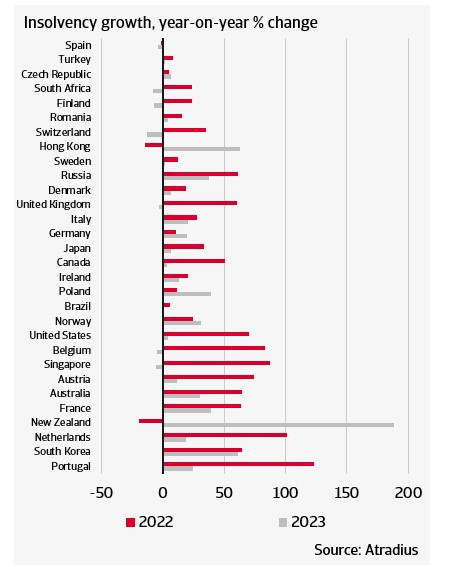 After 2023, global insolvencies are expected to decline or remain constant. “This is because insolvency levels will have largely returned to normal and zombie firms that are not able to survive without support, will have gone bankrupt already,” the report states. Following this, companies will need to adjust to an environment without significant government support. “For firms that have taken up a lot of debt during the pandemic, this could be a challenge.”

Another factor that will affect companies, especially those with high levels of debt, is interest rates. Central banks are starting to tighten monetary policy: Australia’s Reserve Bank lifted the cash rate by 25 basis points to 0.35% at its May meeting, which was followed by a 50-point increase in June. The US Federal Reserve moved ahead with a 25-basis point rate rise in March and 0.75 percentage point rise in June. The Bank of England has already implemented several rate increases. The European Central Bank is scaling down its asset purchasing program, and a rate rise may occur in the fourth quarter of 2022.

How to prepare for the worst

If you’re concerned about the viability of your business, it’s important to talk as early as possible to your accountant or adviser. There are processes that can help, including the simplified debt restructuring process (SDRP) that was introduced on 1 January, 2021. This process allows financially distressed businesses to access a single, streamlined way to restructure their debts, while the owners remain in control.

Jirsch Sutherland Partner Andrew Spring says this process can help more small-to-medium-businesses to survive, which is a better outcome for them as well as their creditors, employees and the economy. “There are a number of reasons why you might want to go down this path, rather than say, choose Voluntary Administration,” he says. “It’s a practical option, and one that is less regulated than a VA. Businesses also benefit from having a restructuring practitioner who can act as a sounding board for directors and management.”