For Jirsch Sutherland Newcastle Partners Bradd Morelli and Stewart Free, completing the Kokoda Track had always been on their ‘Bucket List’.

Although neither of the men had any family members that were part of the now infamous ‘Kokoda Track Campaign’ that was so integral to World War II, they wanted to know first-hand the adversity our Diggers faced and put themselves to the test physically and mentally in the process. 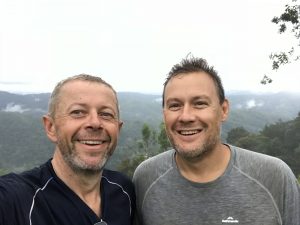 The Kokoda Track campaign or Kokoda Trail consisted of a series of battles fought between July and November 1942 in what was then the Australian Territory of Papua. It was hard going in the worst of conditions with danger and disease at every turn, but it also cemented the Aussie soldiers’ comradery and cultural idiom of mateship that would last for generations to come.

“You have no idea how difficult it would have been for our Diggers,” Bradd says. “Our experience would have not reflected the challenges they faced in any way; we didn’t carry our packs, we had guides basically holding our hands, only walked during the day and didn’t have the threat of an enemy lurking nearby – just to name a few.”

Stewart agrees saying that although it put him to the test physically, there’s no way to compare the experience.

“Being able to follow in their footsteps was the closest thing I have ever come to a spiritual event,” Stewart adds.

“But at the end of the day, we really just went on a long walk and while it was difficult at some points, it pales into insignificance of what the Australian soldiers faced.”

To prepare for the Track both Bradd and Stewart both did ‘lots and lots’ of walking, stair and cardio training to make sure they were as fit as they could possibly be.

Having the mental agility for the track was quite another matter though.

“There is no real way to mentally prepare for something like this… whatever you think it’s going to be like, it isn’t what you expect at all,” Stewart says.

Adds Bradd: “To get prepared mentally I talked to people who had already done it to get a real understanding of what it was going to be like. But really nothing prepares you for this kind of challenge.”

The walk took the friends and work colleagues almost eight days, and by the end of the journey they had achieved a real sense of inner peace as well. 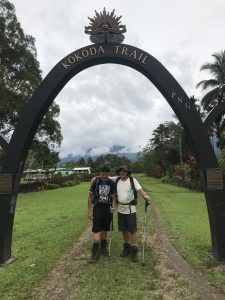 “I felt very relaxed at the end of it,” Bradd says. “The most relaxed I think I have felt in over a decade, the whole experience was quite meditative, and I felt proud, confident and motivated.”

It also changed their perspectives… as challenges often do.

“I think the way that I felt after completing it was that we live in the shadow of freedom and liberty because of what those brave soldiers fought for. Do not take it for granted,” Stewart says.

“Basically, the challenge delivers a reward far greater than anything else I’ve ever accomplished.  It is a solitary test that makes you dig deep and find new horizons. I’ll be doing the trek again as soon as my son is old enough.”

Bradd agrees saying the sense of calm and achievement he felt at the end of the track was something to cherish.

“It definitely changed my perspective on myself and the world, unfortunately those changes only lasted for two weeks before the realities of the rat race returned, but I did go home with a fresh new perspective,” Bradd says.

“It really taught me that life is to be lived, so get out there and do the things that matter to you.”