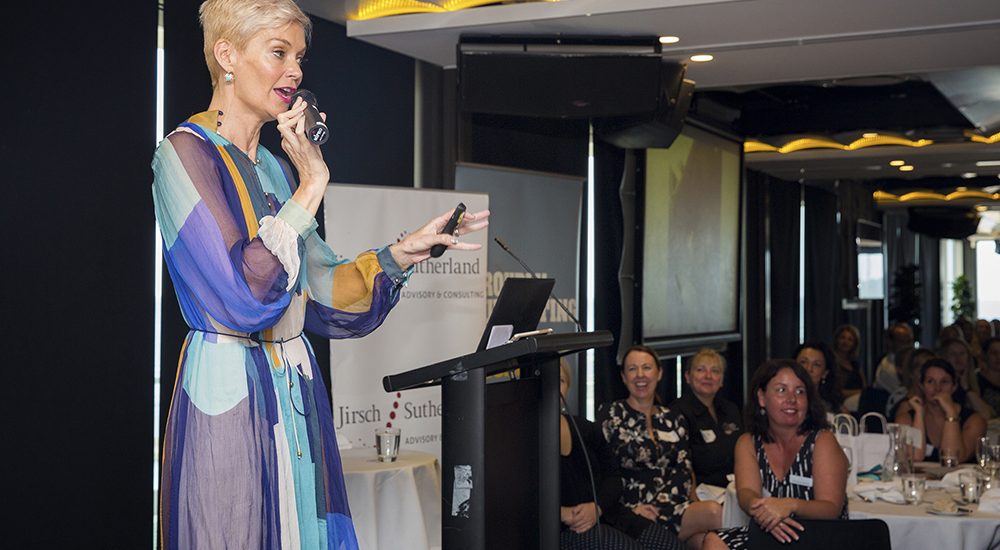 Sponsoring the 2017 International Women’s Day lunch with media personality and mental health advocate Jessica Rowe at the Merewether Surfhouse was the perfect opportunity for Jirsch Sutherland Newcastle to support gender parity and provide an opportunity for four of their female staff members and a number of their clients to hear one of Australia’s best known TV presenters share her career highs and lows, personal experiences with postnatal depression and Bipolar Disorder and reveal how she’s not a perfect mother!

An opportunity to hear Jessica Rowe talk about her career, her life as a working mother and work in mental health advocacy was undeniably the main reason the 2017 International Women’s Day lunch at Merewether Surfhouse attracted over 240 attendees, but it was the TV presenter’s personal experiences with postnatal depression (PND), growing up with a mother who suffers Bipolar Disorder, sexism in the workforce and the revelation she’s not the perfect mum that made it a truly special – and successful – event.

With a career that spans over 20 years across all commercial TV networks, there wasn’t a person in the room who wasn’t familiar with Jessica Rowe – as a presenter and current co-host of Network Ten’s Studio Ten program, as an author, a mental health advocate or a Member of the Order of Australia, which she received in 2015 in recognition of her advocacy work and contribution to Australian media.

Married to Nine News and 60 Minutes presenter Peter Overton, with whom she has two daughters, Jessica is very familiar with the pressures and expectations of balancing the demands of a career with motherhood (and ensuring constant high ratings!).

The highlight of the lunch: Jessica Rowe’s talk on PND and Bipolar Disorder

While plenty of networking took place among the mostly female audience, it was Jessica Rowe’s engaging and, at times, humorous talk that was the highlight. “In addition to her career, life as a working mum and her work in mental health advocacy Jessica shared her personal experiences with PND and Bipolar Disorder,” says Tina, who also juggles the demands of career and motherhood.

While Jessica revealed she has had her fair share of career highs and lows, it was her personal stories delivered with a self-deprecating sense of humour that endeared her to the guests: “She has a very funny side and revealed she’s a bad cook, is often disorganised and regularly embarrasses her girls by collecting them from school bare foot in pyjamas! She even admitted her husband Peter is the one who makes sure she returns phone calls and makes engagements! It was great to hear that she isn’t a perfect mum!” laughs Tina.

For Tina, it was Jessica’s honest and heartfelt recount of her struggle with PND and experience growing up with a mother who suffers Bipolar Disorder that were the highlight of the event. “Jessica told us her mother’s illness was a constant throughout her life and that from a young age she raised her sister without any outside help; she didn’t understand her mother was ill as she looked fine,” she says.

“After the birth of her first daughter, Jessica recounted how she couldn’t work out why she felt sad when she had a beautiful home, husband and daughter, and she admitted she was glad she took the brave step to seek help. Her talk promoted the belief that there shouldn’t be any shame or embarrassment associated with admitting you suffer from a mental illness and asking for help.”

In line with this year’s IWD theme of #BeBoldForChange, which calls for taking bold and ground-breaking action to accelerate the closing of the gender gap, Jessica mentioned her experiences in a male-dominated industry and with entrenched sexism; “When, after five years at the Nine Network’s news team, she asked to introduce the lead story, she was told that only the male reporter does that job because that’s always been the way it’s done!” says Tina. “She took a stand, discussed the issue with HR and won the right to share the lead story introduction.”

In a room full of business women, it didn’t go unnoticed she didn’t need a flashy PowerPoint presentation or high-tech production – just a microphone and a few photos of her family. Given the opportunity for Jirsch Sutherland to sponsor next year’s IWD event, “we would jump at it!” says Tina.

Every year on March 8 since 1911 thousands of International Women’s Day (IWD) events take place worldwide to promote a more gender inclusive world, help women achieve their ambitions, and challenge bias. This year’s theme, #BeBoldForChange, builds on 2016’s #PledgeForParity and calls for taking bold and ground-breaking action to accelerate the closing of the gender gap.